Prices starting
from only... FREE to play!

What makes QuizXpress at Golden Sands Tavern so popular?

It’s trivia that is new, exciting and totally interactive!

Nambucca Heads just received the latest and greatest form of trivia entertainment that is taking the trivia scene by storm and it’s called QuizXpress. Gone is the paper, the pens and the cheating and replaced with wireless keypad buzzers, large TV screens and countdown timers.  This is a fun trivia game show night unlike anything you have played before. 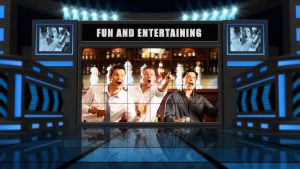 QuizXpress utilises the TV screens throughout the venue, where you get to watch movies, hear songs, see pictures and then must pick from several multi-choice answers using your wireless keypad buzzer.  It’s fun, interactive and totally engaging.

Instead of sitting at home watching the contestants on those TV game shows, why not come on down to the Golden Sands Tavern at Nambucca Heads for a fantastic evening of fun where you can actually experience the closest thing to being in a live TV gameshow and play QuizXpress.  There are fast paced rounds like Fastest Finger and nail biting rounds like Last Man Standing, there is a round of Jeopardy where you determine how many points you want to play for based on the question category. There are some fantastic mini-games like the Wheel of Fun, Horse Race and Cups and Balls and more!  One thing is for sure, playing QuizXpress is never boring, it’s fun and interactive.

Come on down to the Golden Sands Tavern at Nambucca Heads every Monday to get your trivia fix!